Traditionally lit each night between Thanksgiving and New Years Day, the star has been in the trusted care of two families for nearly 6 decades!   George Hostetler and his family built their home and erected the 35’ star to illuminate the greater upland area. That tradition was honored faithfully until 1996, when the home was sold to Ken Petschow. Ken and his wife were immediately drawn to the star after traveling from their home in Pasadena, and fell in love not only with the property – but what the star represented to the community.  In the years that followed, the commercial airline pilot and engineer, ensured the star underwent changes to not only make it bigger – but to make it brighter and more visible to everyone wishing to enjoy this treasured piece of community history.

Ken’s mission has always been one of community spirit – he doesn’t do it for the recognition, and the surprisingly humble man dutifully carries out the work required because he cannot imagine a Christmas season without the star being lit, and I think most residents would agree – its just not Christmas without the San Antonio Heights Star.

Admittedly, Ken likes to keep the Star as spiritually neutral as possible – which serves to welcome new generations every year into this amazing tradition.  Funded largely by public support – the general maintenance and repairs always seem fall to one family and a small group of volunteers donating their time and materials to keep the star as big and as bright as possible.

The Size of the Star

Standing an impressive 75’ tall and using modern LED lights – the star is now larger and brighter than any of its predecessors.   During the Grand Prix Fire of 2003, Ken bravely battled the flames that began to surround the property, even after fire personnel had evacuated. In a defiant last stand to the fire, Ken lit the star and was forced to evacuate as the flames and superheated air engulfed the hillside, taking not only his home, but the star as well. In the years since, the Star has endured its share of hardship by the theft of the copper wire and materials, wind damage and unfortunately political turmoil.

Undeterred, Ken and his band of volunteers are back year after year, citing that as long as he’s alive – the star will continue to be lit.   Public support for the star is always welcome, and if you haven’t done so already, please follow the San Antonio Heights Star on Facebook to get a behind the scenes look at the people responsible for helping to ensure this amazing tradition lasts for generations to come.

Ken Petschow, a commercial airline pilot and his wife Lisa own the property, and lit the star again beginning in 2007.

Thank you for providing support to the Heights Association Programs. As an all-volunteer association we truly appreciate your gifts which allow us to continue to provide service and events that not only enhance the life of this community but surrounding communities as well. You may submit your payment either by check or through our Paypal Account.

The Christmas Star will be lit on Thanksgiving and every night from Dec 6 to Jan 6. Which is the first Sunday in December, and then until January 5th. 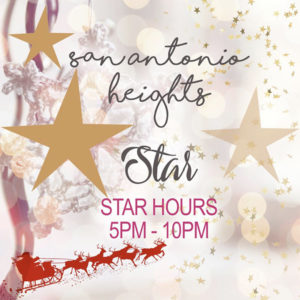 Donate to the Star

You may submit your payment either by check or through our Paypal Account.